There has been much recent, heated discussion on public forums about an issue in our community.  Briefly, the City has been planning for some time to repave White Oak Street between Nordhoff and Rayen Streets.  In order to do so, City experts have determined that two large Aleppo Pine trees located in the White Oak median just south of Nordhoff must be removed. In some circumstances, the Bureau of Street Services may “shave down” tree roots, then re-pave over them. In this situation, the City of Los Angeles has advised that this cannot be done as removal of the roots may cause the trees to become unstable and pose a risk to those using the street and median.

The SFHOA Board first learned of this issue last year.  At that time, based on information then available to it, the Board voted to support the City’s plans for street improvement.  Since that time, more complaints have been raised and more information – and misinformation – has been circulated, including that removal of the trees is unnecessary, that more than 2 trees will be removed, that removal of any trees will create erosion problems, and that removal will disturb nesting migratory birds.

In light of this increased controversy, and in accordance with its Bylaws and duties as a public benefit corporation, the SFHOA wishes to inform members of the following facts:
1.The street and median are public property maintained by the City.
2.Residents can object to City plans for street improvements by testifying at the Board of Public Works.
3. The City’s current plan is to remove two – and only 2 – trees, and to replace them with new trees.
4.Citizens opposed to this plan can object to it at a hearing before the Board of Public Works.  There currently is no date set for the hearing on this matter.  Anyone can sign up to receive notice of the hearing date at http://bsspermits.lacity.org/treepostings/public/pending_postings.cfm. Click on number 648.
5. The City does not remove trees containing nesting migratory birds.  It has been determined by the California Department of Fish and Wildlife that there currently are no migratory nesting birds in the two White Oak median trees slated for removal.

At this time, based upon its numerous meetings with both proponents and opponents of the plan, the SFHOA continues to support the City’s plans for repaving the street, and recommends that anyone opposed follow proper procedures for objection, including observance of all time deadlines for formal objection and procedures for filing written protests.  As with any other matter, objections that are legal, factual, respectful, and detailed have the best chance of success.  If, however, there is enough interest among SFHOA Members, the SFHOA would be happy to host a community Town Hall Meeting to allow both sides to present their arguments.  Paid SFHOA Members who would like the SFHOA to host a meeting may send a meeting request to hoa@sherwoodforesthoa.org.

Photes can be seen in the photo album named White Oak.

RSVP for an Annual Zoom Meeting 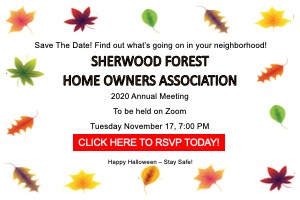 RSVP for an Annual Zoom Meeting 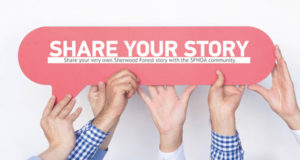 We want to hear your Sherwood Forest Story! Click here to get started.